The Color of Communication — Part II: Brand with a Hue

By Doug KlockeMarch 15, 2018Design, Something to Say

Last month we talked about the vocabulary of color, and how colors interact with each other. Let’s take a look at some strategic color considerations.

Using color to suggest a “warm” or “cool” impression is one thing, but be careful about choosing colors for specific meanings. This may seem like an easy way to tap into subconscious associations. In reality, it just makes you indistinguishable from everyone else who’s trying to do the same thing.

Green, for example, is so often used to suggest “eco-friendliness” that it’s hard to differentiate many sustainable products from environmentally-conscious competitors — or even from the oil giant BP.

Other over-used associations include white for good, black for evil, blue for honesty, purple for royalty, and red for passion.

It’s especially important to avoid color associations if you’re going after a global audience. In Western cultures, for example, white is used at most weddings. In many parts of Asia, however, it represents death, mourning, and even bad luck.

“Blue” is not a color choice

Brand colors need to be as specific as possible. It’s not enough to say you want the logo to be blue, for instance, because “blue” can mean many different things. The sky is one kind of blue. A navy suit is another. Robins’ eggs, sapphires, blueberries, and the water in the Caribbean are all technically “blue,” but each has a distinctive character.

So sure, we can start with blue as a general guideline. But go deeper. What kind of blue do you want?

What color is your competition?

I don’t know whether Home Depot’s trademarked orange or the rich, deep blue used by Lowes came first. But it’s probably no accident that these two big-box hardware rivals selected their signature hues from opposite sides of the color wheel.

This strategy makes good business sense, because it dramatically reduces the chance that you’ll confuse one with the other. For the same reason, you’ll want to pay close attention to the colors associated with your competitors, with the goal of creating a distinctive identity for yourself.

Putting your colors on display

Once you’ve settled on your identity’s colors, document them thoroughly and use them consistently. Brand standards guides typically define colors in four formulas:

It’s worth the effort to define every color in your palette using all four of these models. Why? Because even the best design software — including Adobe Photoshop, Illustrator, and InDesign —doesn’t always translate colors accurately when converting graphics from one format to another.

Instead, it’s best to have a separate version of each visual design element prepared for each format it’s likely to appear in. While it’s a little extra work up front, it will ensure that your colors stay vibrant and memorable wherever they appear.

Something to Say is a monthly newsletter with suggestions, observations and musings about visual communication. 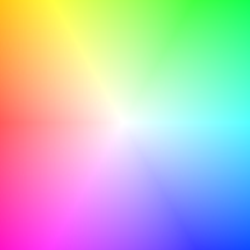 The Color of Communication

The Color of Communication

We’d love to hear from you.

Or send me a message:

Something to Say is a monthly newsletter with suggestions, observations and musings about visual communication.

After you sign up with this form, you will receive an email asking you to confirm that you want to subscribe. Once you confirm, you'll be on the list. Of course, feel free to unsubscribe at any time. (Though I don't think you'll want to.)