Cozy Columbus, Indiana, located about 45 miles south of Indianapolis, may seem like an unlikely place for an architectural mecca. But the ambitions of J. Irwin Miller, president of Cummins Inc. in the middle of the 20th century have given it an enduring legacy of architectural innovation.

To attract top talent to his company, Miller sought to make Columbus a compelling place to live by encouraging great architecture. In 1954 he set up the Cummins Foundation to bring in signature architects and subsidize their fees for public buildings. More than half a century later, a stroll through Columbus allows you to see the work of great architects from mid-century through today.

I recently took just such a stroll myself when I visited Columbus to pursue my own long-standing fascination with architecture and structure. While I was there, I discovered the Columbus City Building, an intriguing structure by an architect I had never heard of (Edward Charles Bassett of Skidmore, Owings & Merrill), from an era (the early ’80s) not necessarily known for great architecture.

Like graphic design, architecture differs from fine art in the sense that it is created to serve a specific purpose. The forms an architect designs must be functional, are constrained by the laws of physics, and should ideally lift the human spirit.

The Columbus City Building achieves all three of these goals, though you don’t fully appreciate the power of the building until you approach it. A long walk bisects a triangle of lawn. As you get closer you notice a feeling of energy flowing down the steps and over you.

The sensation is no accident. Bassett is deliberately playing with design elements that create and direct this “energy.” For example, while the building itself only takes up about half of the land, the space is not wasted. It’s part of the experience. 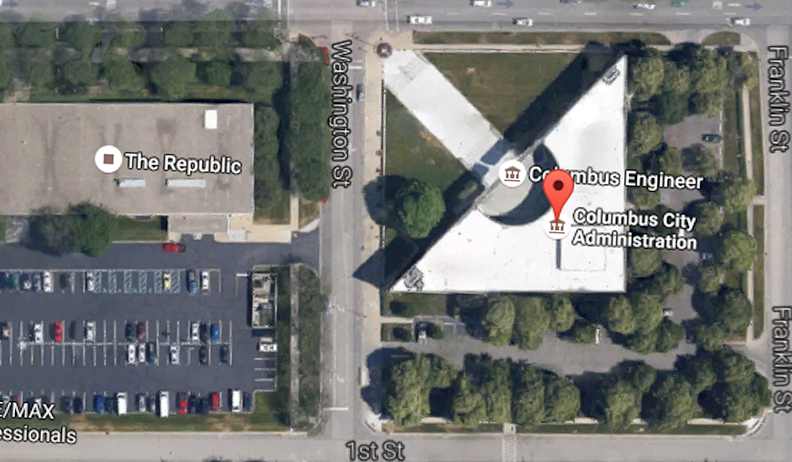 Mounting the steps, you appreciate the weight of two cantilevered arms above you that don’t quite touch. That gap is electric. It draws down a vertical energy that is both humbling and awe-inspiring. It’s as if a mischievous music student has played all but the last chord of a well-known piece of music, leaving you in a state of lingering anticipation.

Passing under the arms, you enter a semicircular courtyard. The arms define a portal into a new space, and your eye is drawn upward to a “ceiling” that isn’t there. At the same time, there is a spiraling circular energy created by the arced wall of glass that you face. You reach a point where your reflection is caught — identically — in each of the windows facing you. For a moment, you’re transfixed by all those reflections, but then that spiraling energy creates a centrifugal force drawing you to one of the several entrances into the building.

Turning around, you see the city framed — embraced, even — by the arms you walked under. You see that the path you walked up, continues across the street and into the park behind the historic county courthouse. From this perspective, the same structure creates a completely different effect that links the old and new. More importantly, there is a connection between the work of the people in City Hall and the city and people they serve. 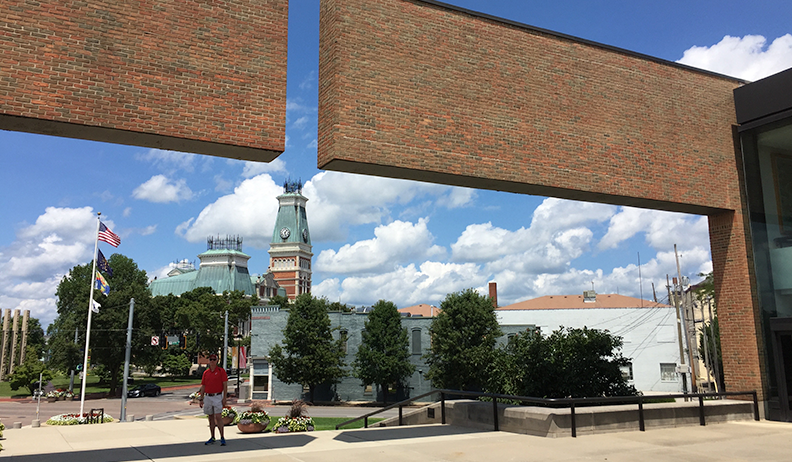 As you walk back down the steps, you are lifted by the energy flowing out of the city building — truly a stunning experience.

Because a great architect or designer understands the flow of “energy” among and between the elements they are manipulating. Whether you’re bringing people into and through a structure, or leading a reader through the content of a poster or brochure, an understanding of this energy is critical to achieving the function of the building or communicating your message.

I’ll talk more about visual energy, and how it applies to graphic design in a future article.