Brand Sentinel: The Case of the Retail Rogue

By Doug KlockeMarch 23, 2017Something to Say
No Comments 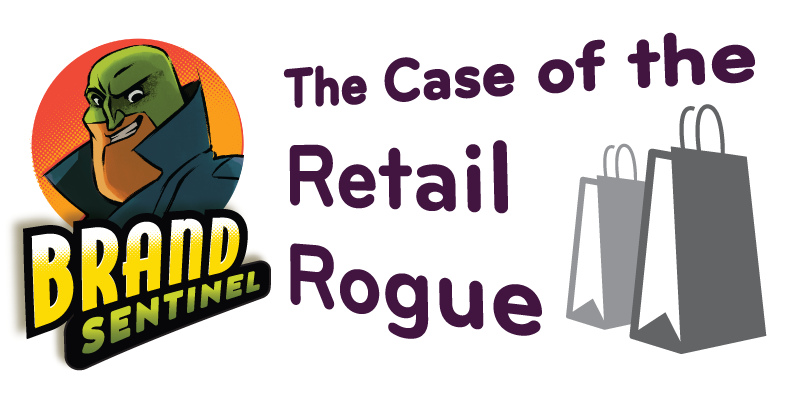 We find our hero wandering aimlessly through the women’s department of an anchor store at Vendopolis Towne Commons Centre.

“A lifestyle center?” the Brand Sentinel muttered under his breath. “These people need to get a life.”

Maude’s birthday was coming up, and he needed something — anything — to make up for all his late nights seeking out poor design and branding crises. Perhaps a scarf? He reached for a piece of synthetic floral fabric. Thirty bucks for this? The silkscreen isn’t even in register!

Turning away, he thought: I have no idea what I’m doing. Maybe grabbing a pint at Mickey’s will kick start some inspiration. Now how do I get out of this store?

He spied a store directory by the escalators with a big red star marking his current location.

“Macy’s? I thought I was at Dillard’s.” He looked up at the top of the sign.

“Wait a minute…I am at Dillard’s! What dope would put their competitor’s logo on their own store directory sign? And can’t they even hang the sign straight?!”

As soon as he said it, he knew it could only be the work of one man…

Never one to come up with a fresh idea if his life depended on it, The Hack was notorious for tackling design tasks with as little effort as possible — all the while touting his rock-bottom rates. The Hack’s most common tactic was simply to slap up a piece of free clip art, usually with Times New Roman type (or even Arial—shameless). But to think he would put a Macy’s star on a Dillard’s store directory! That wasn’t just laziness, it was malpractice.

“If only they could punish him for his crimes,” the Brand Sentinel thought. The trouble was that criminal intent could never be proven. No one could tell if he was doing it on purpose, or just trying to get back to surfing Facebook as quickly as possible. Worst of all, most of his crimes went unnoticed — his victims never realizing the damage he’d done to their brands.

“This guy would be my arch-nemesis if he had any ambition,” our hero mused.

Having finally found his way out of the store, the Brand Sentinel commenced the task of perusing the assortment of automotive logos in the lot, trying to find his trusty Brandmobile among the sea of cars. As he looked at the sharp grilles and narrowed headlights facing him, he felt himself becoming increasingly angry. What’s this about? he wondered. But before he could pinpoint the reason , he glanced up. “No!!!”

He knew there was a Target at the far end of the parking lot, but that wasn’t what he saw. Several letters of the “Pharmacy” sign were burnt out, once again promoting Macy’s at the expense of another brand! “So now The Hack is vandalizing environmental graphics! That’s a new low.”

The Brand Sentinel pressed the alarm button on his key fob hoping for a hint of where he was parked. No response. He pulled up the collar on his trenchcoat and trudged on…

Is The Hack in the back pocket of Macy’s? Has the decline of brick-and-mortar made Macy’s so desperate that they would seek out the services of a lowlife like The Hack? Or is The Hack simply getting his kicks by sowing seeds of identity chaos?

Tune in to future episodes of the Brand Sentinel as he seeks to bring this uncaring miscreant to justice…and find his car. In the meantime, be vigilant. The Hack can strike any brand, anywhere, at any time!